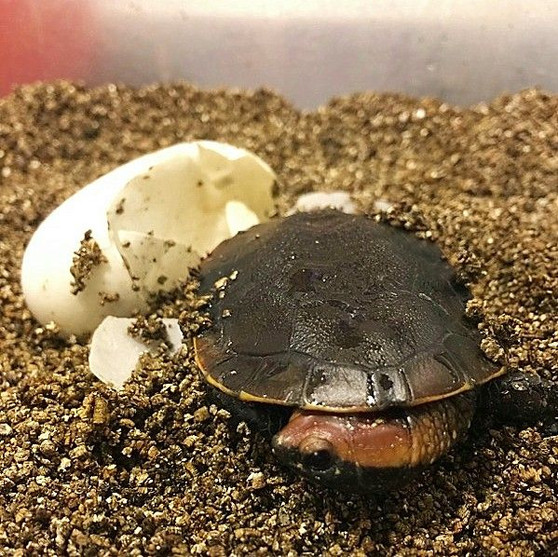 We're proud to join the very small ranks of breeders who actually set up adult Twist-necks for several years and produced and hatched one/some of these impressive smaller versions of the adults...(Imported females that come to the US with viable eggs already inside them simply don't count as "American born and bred" among turtle breeding purists. )

Twist necked turtles are one of the world's most unique species, they are very flat, oval shaped with a double keeled (ridged) shells and little orange heads - it is the only species in the genus Platemys. Biologists who have seen them in nature describe them as the "South American Bog Turtle", living in very shallow creeks, marshes and even forests of Venezuela, Brazil, Guiana, Ecuador and Peru. Known to be poor swimmers, (yet expert "stompers") living in the most shallow water, they are highly terrestrial and their diet is mainly worms, snails, insects and some plant matter.

Females lay just one large egg at a time and bearly cover or conceal it. Hatchlings emerge 195 days later, very large, (2.25") for a species that bearly makes it to 6" as an adult.

Our's personality shifts from from very active and outgoing to secretive and shy in just an instant - likely a survival adaptation useful in marshy natural habitats often filled with predators... Twist-necks are well known for being active, personable little turtles that thrive once established - but laying eggs - and laying eggs that hatch are two very different things . . .

What a cool little turtle! Super friendly and outgoing & so small that 2 or 3 can live permanent…

Pelusios Sinuatus, the East African Serrated Side-Necked Turtle. With serrated in the name due to th…