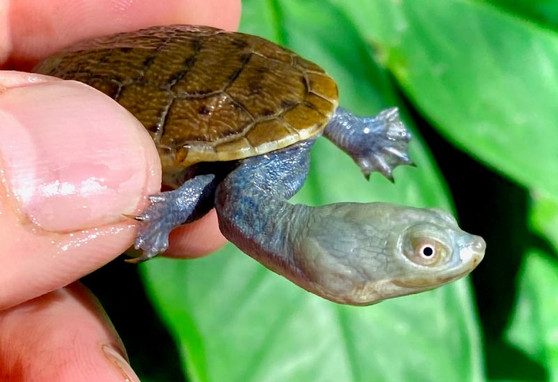 Yes Blue! About one in a hundred hatches out this blue color...Unlike the many shades of brown, we have seen the rare blue ones stay a blueish cast as they grow up...Very cool colored - and yet they behave the same as the normal brown ones. So far this year, only one blue one has hatched out.

Siebenrock's snake-necked turtle (Chelodina siebenrocki), is a very odd looking turtle from the swamps, marshes and lagoons of the southern coast of New Guinea west of the Fly River, and is also thought to occur at Cape York in Australia. With a head and neck equal to it's shell length, this carnivorous turtle is a super predator - with powerful neck muscles it launches it's head with amazing speed, seizing it's prey. Despite Siebenrocki's impressive hunting skills, it is not aggressive, and does not bite when handled.

Siebenrock's Snake-necked Turtles are one of the most impressive tank turtles to keep. They are outstanding swimmers and put on a fine display when stalking fish and insects. Our hatchlings readily take pellets, cut or small live fish, cut beef heart, super and earth worms. Chelodina Siebenrocki can fold it's long neck and tuck it completely under it's shell - yet it often forages about with it's neck fully extended, ready to retract as fast as it can strike. This intriguing turtle does not need to bask, and will endlessly fascinate keepers - who can't help but do a double take at one of nature's true oddities.