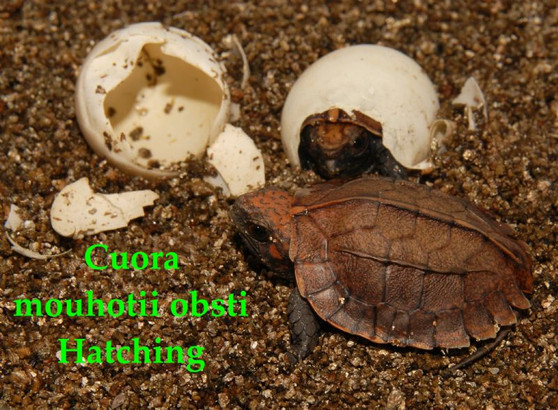 Annam Three-keeled Turtles are the less common sub species of Cuora mouhotii. Unlike the wider spread C. mouhotii, which is found in much of southeast Asia (India, Bangladesh, Myanmar, Thailand, Laos, Cambodia and Vietnam) the Annam three-keeled turtle is only found in the ancient Vietnamese province of Annam - which is in the central Phu Loc region of Vietnam. Physically, Annam Three-keeled Turtles differ from C. mouhotii with broader,rounder carapaces, radiating streaks on the plastron and orange head coloring - especially in juveniles. Only recently re classified as a Cuora, Annam Three-keeled Turtles essentially live the life of a North American Box turtle, inhabiting forests and foot hills, entering water only as part of their day's journey. Our adults take pellets, earthworms and some vegetation. The hatchlings pictured are the first two we've ever hatched. Their colors are very impressive and their behavior is identical to our hatchling Cuora flavomarginata (Golden Box Turtles). Protection for this species is more from the food markets in their natural range - than for the pet hobby, as adults of this species that come from nature are well known for doing very poorly in captivity. Our breeding colony's set up has evolved several times before our adults seemed at home enough to thrive and lay fertile eggs.

One of the world's smallest turtles, the Reeves Turtle, or Chinese Three Keeled Pond Turtle, is one …

Spiny Softshells are very good community turtles. They're excellent swimmers and do well in partly o…

Here's a great little pet turtle - they're highly intelligent, good swimmers, and they get along wel…