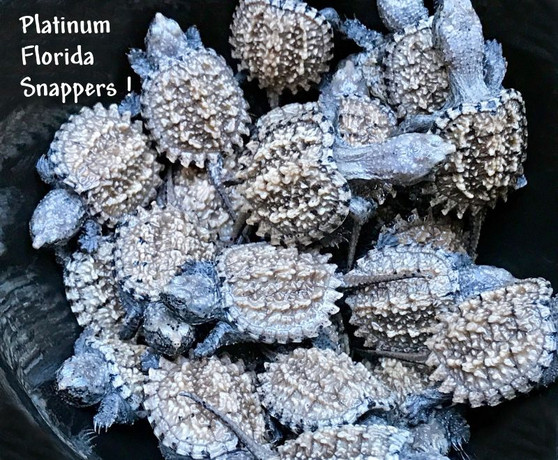 If you hatch 10,000 Florida Snappers each year, you may notice that one out of every few hundred comes out very light and silvery "Platinum" colored - so we put them aside & saved them - for you ! They are simply very pretty versions of Florida Snappers - their care and behavior is exactly the same as for normal Florida Snappers - and follows:

Please note: Our platinum snappers, like all turtles, have some color variation. Our top photo shows some tan-er colors and the bottom picture shows some more silvery colors - we sending them out, we select for the lighter most silvery colors. With snappers, lighter cages and surroundings make for lighter colored turtles, salmon in their diet also helps their colors to look brighter.

One of North America's most recognizable fully aquatic Turtles, the Common Snapping Turtle, inhabits nearly all bodies of slow moving, soft bottomed water, fresh and brackish, from Nova Scotia to Mexico, east of the Rocky Mountains. In Florida it gives way to the Florida Snapping Turtle.

Common Snapping Turtles are true omnivores, and will eat anything they can fit into their mouths. Juveniles freely forage for food, while adults prefer to be ambush predators, lying in wait for the next passing meal. These tendencies make all sizes excellent tank turtles. Not the best community turtles, juvenile Common Snapping Turtles think everyone's tail is a worm - and will promptly remove them - even other snappers'. We feed ours pellets, cut fish and beef. Water plants are also offered. One study has shown hatchlings to imprint well on early food items.

In the last century, people's taste for Common Snapping Turtles, severely damaged many wild populations. Now, many are farm raised, both in the US and abroad. Wild Snapping Turtles are almost always quite vicious. Captive raised snappers, if handled often, will tame down fairly well. They never loose their fiercely vicious feeding response, and keepers never seem to loose their fascination for them...

This unique snapping turtle has pinkish skin with shades of blue and white, and even some yellow hig…

Here's a Hypo Snapper like no other. It has lots of orange and yellow coloring - but it also has tra…

About as rare as they come - a Two Headed Snapping Turtle... There are Two Headed Red Ears, even the…

This yearling Common Snapper is a very pretty orange with very crisp/striking markings. It's belly i…