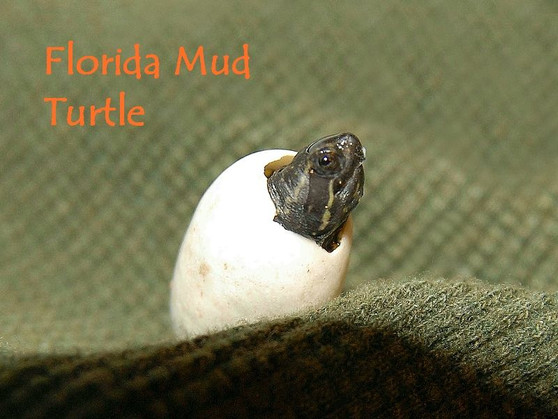 A particularly interesting turtle. Currently, Florida Mud Turtles are recognized as a sub species of the Eastern Mud Turtle, they much more closely resemble the Narrow Bridged Mud Turtles of Mexico. It also has very narrow bridges (the part of the shell that connects the top and bottom of it's shell), it has a massive maw and can also be extremely aggressive, it has a very reduced plastron (bottom shell), it's neck is surprisingly long, and it's head is very large in proportion to it's shell size.

Holding a Florida Mud Turtle in one hand - and an Eastern Mud turtle in the other, even the casual hobbyist can see that someone needs to write a paper and seperate this turtle out into it's own species. Found only in peninsular Florida, it is very rare through out it's range, with females being extremely rare. Rarest of them all is a very dark phase which is only occasionally seen. Some male Florida Mud Turtles actually have a small claw at the end of their tail that presumably helps steady the female's tail during breeding.

Their diet is the same as most other mud turtles: pellets, worms, insects, fish and meat are all readily eaten. Shallow tanks with smooth gravel, rocks and logs are perfect - with only minimal basking surfaces needed.

With fully grown adults under 5 inches, Florida Mud Turtles are excellent small tank turtles. Each year we hatch just a handful of these unique little mud turtles, and only occasionally offer yearlings or young adults. Many keepers in Asia and Europe have recently recognized Florida Mud Turtles for the rare prize that they are, so expect these turtles to become increasingly difficult to find.

Mexican Giant Musks are one of the very best tank turtles. Excellent swimmers, they do well in shall…

Easily one of the prettiest colored turtles in all the world, the Red Cheeked Mud Turtle is actually…

Here is the friendliest and most personable of all the mud turtles...Once commonly available, Yellow…

One of the smallest, and best species to keep, Three Striped Mud Turtles (Kinosternon baurii), are a…

Stinkpots or common musk turtles are mostly aquatic and do very well as residentgarbage disposals.…

A pretty and personable mud turtle, White-Lipped Mud Turtles are found in the quiet waters with soft…

Here is the friendliest and most personable of all the mud turtles...Once commonly available, Yellow…

What a cool little turtle! Super friendly and outgoing & so small that 2 or 3 can live permanent…

Mexican Giant Musks are one of the very best tank turtles. Excellent swimmers, they do well in shall…

Easily one of the prettiest colored turtles in all the world, the Red Cheeked Mud Turtle is actually…