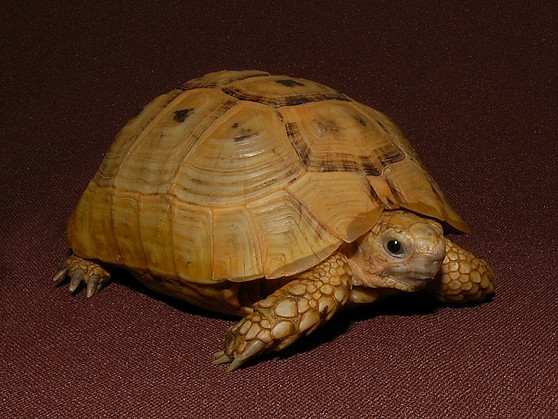 Golden Greek Tortoises (Testudo graeca terrestris) are a geographic variation of the Greek Tortoise, found in Libya, Lebanon, Jordan, Syria and the surrounding middle eastern region. Their color ranges from light yellow to an impressive golden brown. Their behavior and husbandry is synonymous with that of normal colored Greek Tortoises - which follows:

Greek Tortoises, (Testudo graeca) are found in along the coasts and in the hills and mountains of southern Spain, north Africa, the middle east, Russia, Romania, Turkey and of course Greece. One of the most popular species with keepers the world over, Greek Tortoises are outgoing and develop quite friendly dispositions. Golden Greek Tortoises are a desert species and should never have a water bowl. Constant access to greens and short, shallow soakings (3 times a week for hatchlings, twice a week for yearlings and two year olds, and once each week for adults) is their source of hydration. This along with their ability to quickly adapt to new environments is the key to their success.

The Tortoise world can not seem to agree on whether the Black color phase is geographic, or pops up …

Hermann's Tortoises, (Testudo Hermanni) are found in the woodlands, rocky hillsides and meadows of S…

Red-footed Tortoises are the inhabitants of the exotic jungles of the Caribbean, Central and South A…

Here's the perfect tortoise to keep with your Red Footed & Yellow Footed Tortoises. They are just as…

One of the oddest & rarest tortoises species ever seen, the African pancake tortoise actually ha…