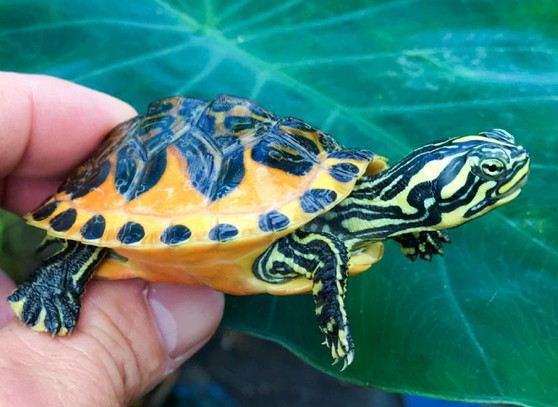 "Wow, Breathtaking, OMG" is what everyone who sees these in person says. Over 10 years ago we hatched a very "orangey", very pretty group of Florida Red Bellied Turtles. We raised up that group and saved the prettiest ones to breed. Four years later we produced several clutches of even brighter and more colorful Red Bellies. From that second generation, we again saved back the prettiest colored turtles to breed. What you see now is the third generation of super high orange turtles - many with over half their shells bright orange & yellow. We also held them back for personality, so these new Golden Flames are super outgoing, never shy and always friendly.

Their diet, care and husbandry is exactly the same as it is for normal colored Florida Red Bellied Turtles - they are very easy - and very rare tank turtles.

Golden Flame Florida Red Bellies are one of the world's hottest color morphs! Only 3 short years and we turned hatchlings into the next generation of these beautiful turtles!

*Special thank you to Dark Hammock Turtles for developing this super easy to breed color morph!

Golden Flames are graded by color: More green than gold is the very pretty "Wing" phase, strong gold/orange colors is the beautiful "Normal" Golden Flame, and the eye popping, mostly gold/orange is the "Super" Golden Flame!

Yet another Paradox morph ! Emerald Albino Paradox are the newest - and possibly the coolest looking…

Albino Red Eared Sliders are one of the most striking of all turtles to keep. One in a million, thei…

One of the prettiest of all the sliders, the Belize Slider (Trachemys scripta venusta) ranges from V…

Peninsula Cooters are a very hardy species. Mainly herbivores, juveniles will eat some fish and inse…