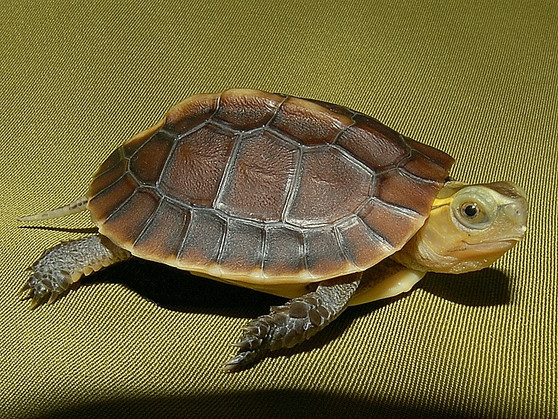 Chinese Box Turtles (Cistoclemmys flavomarginata) are one of the finest of all the box turtles. Found in the ponds and overgrown streams of southern China, Taiwan, and on the Ryukyu Islands of Japan, this handsome turtle has a hinged bottom, just like it's American Box Turtle counterparts. Also called the Yellow-margined box turtle, they have golden yellow head markings - with an orange chin, yellow plastron (belly) colorings around a darkened center, and a distinct golden yellow vertebral stripe on their high domed shells.

Not shy at all, Chinese Golden Box Turtles are very out going and are most active in mild temperatures. We feed our juveniles pellets, earthworms, fish, romaine lettuce and some fruits. Favorites include strawberries, melon and bananas. Some US breeders are successfully hatching these hardly little turtles that only grow to about 6 inches as adults. Chinese Golden Box Turtles are considered the Cadillac of all the box turtles by many keepers, and do very well in primarily water set ups, that include a fair amount of land. An excellent species for keepers of all levels to enjoy, Chinese Golden Box Turtles are a perfect example of captive breeding at it's best - as the species is under considerable pressure in the wild from Chinese food markets.

Albinos are as rare as they come in nature & for soft shelled turtles, this is the only species …