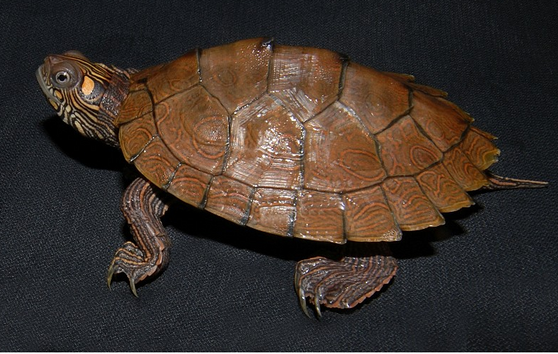 Availability:
Great for ponds after 4 inches!

Very similar to our High Orange Mississippi Map turtles, we hatched one small clutch of Ouachita Map Turtles that showed early hints of orange on their heads & shells.  As they grew, their orange became more pronounced - even their legs and tails have orange where normal Ouachitas have yellow or white.  Their behavior and care is identical to that of normally colored Ouachita Maps and follows:

One of the small headed Map Turtles, the Ouachita Map Turtle is found in swift rivers and silt bottomed lakes from Texas and Louisiana north to Ohio and east to Kentucky.  Ouachita Maps loves to bask, and often pile serveral turtles high to share the same basking log.  With colors from ranging from light gray to deep brown, this very pretty map turtle has many color varations.

An ideal turtle for beginning keepers, Ouachita Maps stay small, quickly become very familiar with their keepers and their tanks; and get along very well with most other turtles species.  This active little turtle is a fine choice as either a first turtle - or as a community turtle.

In 2004, A single clutch of Map Turtles hatched out with these stunning orange markings. The parents…

For keepers looking for something truly unique, here it is... A single clutch of eggs laid by a fema…

Our Adult Ouchita Map Turtles are large 6 - 8 inch females. They do very well in deep ponds with lot…

Our Adult Ouchita Map Turtles are large 6 - 8 inch females. They do very well in deep ponds with lot…

In 2004, A single clutch of Map Turtles hatched out with these stunning orange markings. The parents…

Found only in one Texas river system, Texas Maps are one of the more prized map turtles; and are onl…