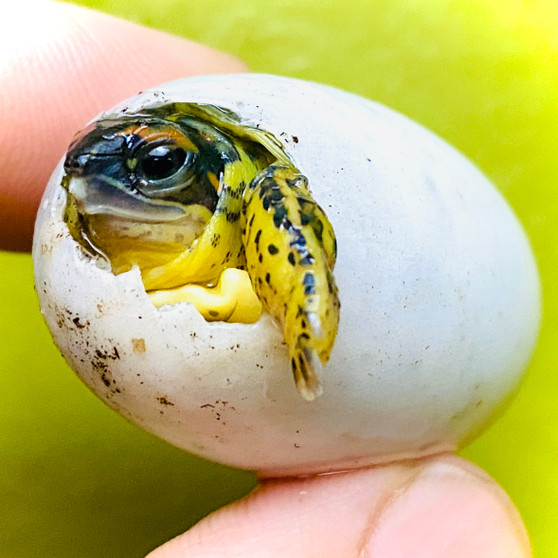 Furrowed Wood Turtles (Rhinoclemmys areolata) are one of the world's smallest wood turtles. Our largest breeding adults are all fully grown right around 6 inches. These are a very personable and outgoing little turtle that interacts and entertains keepers endlessly. Babies hatch out a pretty blue green that eventually turns into an olive green as adults.
For such a small species, they hatch out at a full 2 inches - an adaptation to better survive in the wild. Our Furrowed Wood Turtles get along with each other and other similar semi aquatic species quite well.
Furrowed Wood Turtles are found in marshy woodlands and savannas in much of Mexico, Belize and Guatemala.
While Furrowed Wood Turtle numbers are declining in nature, this once rarely bred in captivity species is now becoming much more affordable as several breeders are now successfully working with them.
Pretty orange head markings and bright yellow skin with black speckled highlights make Furrowed Wood Turtles one of the more attractive wood turtles to keep. True omnivores, ours love pellets and enjoy worms, insects, fruit & some greens. Our breeding success is now your opportunity to enjoy a great, small turtle species. They are at home in small numbers, with other similar species, or in larger groups - the way we raised our breeding colony. Each year, our Furrowed Wood Turtles usually hatch in September, and are ready to go by October - Enjoy !

Mexican Red Wood Turtles are one of the four subspecies of tropical wood turtles. These are largely …

Before the standard info, some interesting facts:   Only a very small handful of US breeders ha…

Cohuilan Box Turtles, (Terrapene coahuila scientifically), are an amazing species ! They are the rar…