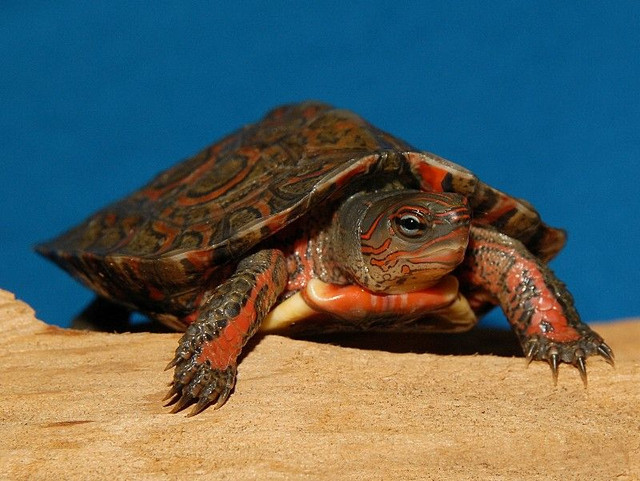 These are surely North America's most exciting turtles. They are personable and alert and beautifully marked with yellow spots and orange adornment. Bog Turtles are protected and under extreme pressure in nature. Western Pond Turtles too are under similar pressures from man’s activities. Wood Turtles have a devoted following in the hobby. Though recently available as wild-collected specimens, Spotted Turtles are now protected throughout their range.

Clemmys guttata ranges from southern Maine west to extreme northeastern Illinois and south along the coastal plain to northern Florida. Glyptemys insculpta is found in and along streams from southern Canada to northern Virginia and as far west as southeastern Minnesota. G. muhlenbergi lives in disjunct populations in eastern New York and western Massachusetts south through the Appalachian Mountains into northeastern Georgia. Emys marmorata is found in disjunct populations from southern British Columbia to Baja California.

We have established several successful enclosures for this group of turtles. A typical outside enclosure is made of a rectangular pen created by stacking two layers of railroad ties. Our pen measures 10' x 10' and is approximately 2' tall. We make sure that it is partially shaded by surrounding trees or shrubs or a manmade structure during part of the day. Inside of this enclosure is a sunken Neodesha Turtle Tub® that measures 40" w x 72" l x 10" d. This sunken tub serves as the water portion of the enclosure. It is filled with dechlorinated water and driftwood and aquatic plants are added. We also add a cloth bag or leg of a pair of panty hose full of peat moss into the water initially to help lower the pH. At one end of the enclosure we add a deep (10”) layer of a mixture of ½ peat moss and ½ damp river sand. This the egg-laying area. The other end of the enclosure is heavily planted with bog and marginal plants such as wild iris, papyrus, cattails, and taro. We leave an 18" x 18" along one side with sand and peat only; no plants. This area serves as the feeding area. A series of steps are constructed within both ends of the water area so the turtles can easily climb out. This enclosure has proven to be very successful for keeping and breeding of Spotted Turtles at the Turtle and Tortoise Preservation Group.

Indoors, Spotted Turtles and Wood Turtles are set up in our larger tubs (48" w x 84" l x 24" d). Winter or "resting" enclosures such as these are not as elaborate as their outdoor enclosures for ease of maintenance and for watching the turtles’ behavior and condition more closely during this time. Substrate once again consists of ½ peat and ½ damp sand, but we first add about 10" of pea gravel to the bottom of the tub to allow some drainage for this especially damp system. A smaller cat litter pan or cement-mixing tub is placed inside to create a water area. A top layer of cypress mulch is placed over 75% of the environment to aid in holding in moisture. Shade-loving plants such as Pothos and English ivy are added and palm fronds and dry leaves add to the cover. We have used sheets of bark and large slabs of slate resting sturdily on bricks to act as cover for the more shy turtles.

Spotted Turtles, Wood Turtles, and Western Pond Turtles can also be kept in a more aquatic enclosure. We have had success keeping them with some species of musk turtles in a fully aquatic environment. They do bask and are often found out on the basking sites or resting on driftwood logs, but seem happy to live in this aquatic situation. Care is taken in this type of enclosure that the sides of the water portion are sloped or that stacks of slate are sturdy and sloping out of the enclosure. There have been cases of females drowning by the aggressive advances and weight of the males upon the females during mating. The sloped edges and slate allow the female to drag herself and the accompanying male out to land or to a situation where she is not weighted down underwater.

Spotted Turtles thrive in all of these environments as long as they have plenty of clean water. Their water should be warm (76-78° F) with low pH (6.5 to 6.8), and they should have access to lots of live plants that offer hiding spaces and security.

Spotted Turtles, Bog Turtles, and Western Pond Turtles have a more carnivorous diet, which includes invertebrates and occasional (once a week) feedings of high-quality canned cat food, and lean meat, dusted with calcium powder and multivitamins.

Common Health Problems: Health problems and shell abnormalities can arise from poor nutrition. Fungal infections attach to abrasions and swollen irritated eyes develop when water quality is poor, especially when pH of the environment is too high. If kept for some time outdoors in direct sunlight and in clean water, these turtles thrive!

Breeding: Spotted Turtles can be prolific in captivity, laying 2-3 clutches of four eggs each year. Cooling, even minimal to spark reproduction.

The babies can be set up in the 20-gallon long aquarium system mentioned in the Indoor Enclosures and Hatchlings sections of this book. The babies are hardy and grow quickly when offered a healthy diet featuring a variety of feeder insects (redworms, crickets, etc.), live guppies, and commercial pelleted food. Reptomin®, with its worm-like shape, seems to be an early favorite.

The Wood Turtle (Glyptemys insculpta): This semi-terrestrial turtle was once the largest member of the Clemmys group and now finds itself with the Bog Turtle in a genus of their own. Wood Turtles are found in and along streams from southern Canada to northern Virginia and as far west as southeastern Minnesota. They have suffered greatly from habitat loss and habitat fragmentation as marshes and bogs are filled in to make room for more housing and urban development.

Wood Turtles are best kept in the terrestrial / marsh type enclosure described above. They are fed a more omnivorous diet and once or twice a week they eagerly consume a salad consisting of shredded fruits and vegetables which is dusted liberally on every fourth feeding with a high-quality calcium with Vitamin D3 and multivitamin powder. (They are especially fond of a mixture with varying amounts of kale, greenleaf lettuce, squash, sweet potato, red cabbage, cantaloupe, strawberries, banana, and apple.)

The Bog Turtle (G. muhlenbergi) is the smallest and rarest of the group. It lives in disjunct populations in eastern New York and western Massachusetts south through the Appalachian Mountains into northeastern Georgia. It too, faces multiple challenges including habitat loss, habitat fragmentation, and increased pressure from man’s activities.

The Western Pond Turtle (Emys marmorata) is the most aquatic of the group. They are found in ponds, mountain streams, and in some areas is found in brackish coastal pools. They are very cosmopolitan in their tastes and will feed on fish, insects, worms, and even aquatic vegetation. It is a very shy and secretive turtle and even captive-raised specimens exhibit this extremely nervous disposition. They love to bask, so enclosures both indoors and outdoors should have plenty of basking spots and exposure to heat and UVB rays.