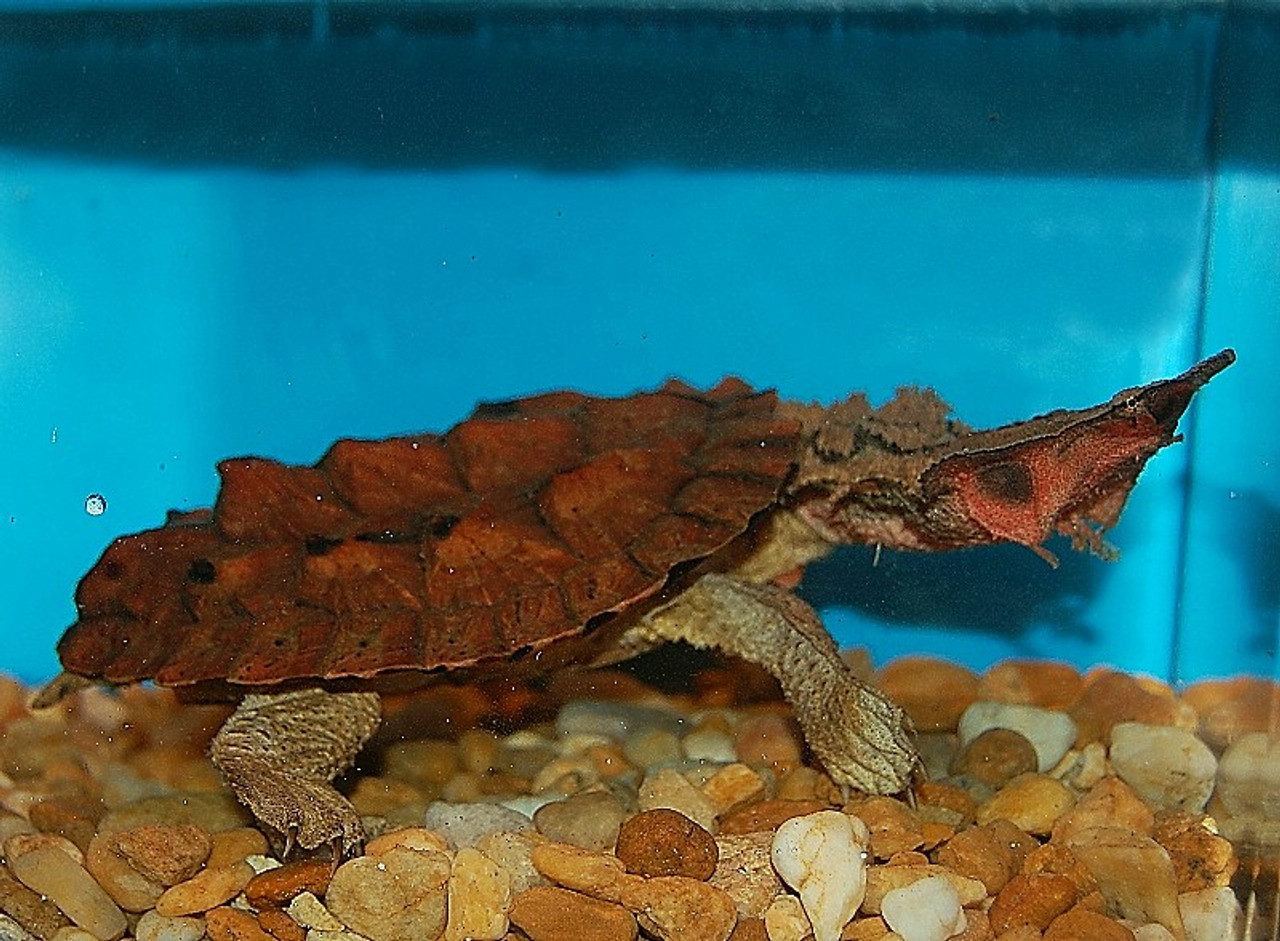 The Matamata is truly one of the world’s most unusual turtles! This large South American species is a wonder to watch - its interesting lifestyle and bizarre appearance make it perfect for a beautiful display.

Matamatas are found in the Amazon River and its tributaries in Peru, Venezuela, Guiana, and Brazil.

Matamatas grow large and imported specimens of 17-18 inches are not uncommon. Obviously, these large specimens require large enclosures. Matamatas, however, are not active hunters and like the Alligator Snapping Turtle, they need less space than a large, active species. Small to medium specimens (6-10”) can be kept successfully in a 40- to 60-gallon aquarium.

Water quality is the key to keeping this species successfully in captivity. The water's pH should be low (5.0 to 5.5) and the addition of tannins from peat, leaves, and sphagnum moss in the water adds to the development of a perfect Matamata enclosure. Water temperature should be warm (78° to 82° F) and maintained year round. It is felt by several long-term Matamata keepers that the surrounding room in which their enclosure is located should also be maintained in the 80° to 85° F range to avoid having the turtles breathing in cool air and causing potential respiratory problems. They require moderate to heavy filtration. We do, however, suggest a break in any falling water. A driftwood stump or rock will keep the water from falling and splashing too violently into the enclosure, more closely resembling the quiet, slow-flowing inlets of its natural habitat. A Matamata enclosure should have a sandy substrate to prevent abrasions to the turtle’s plastron and to act as an anchor for plants. Decorations can include driftwood and a variety of submerged and floating aquatic plants. As Amazon River dwellers, there is certainly no shortage of plants from which to choose. (Most tropical fish and plants in the pet trade are of Amazon River origin.)

Lighting should be provided by UVB-emitting bulbs in shop light fixtures. Even though these turtles do not bask, we offer a 100-watt spotlight over one end of their enclosure to add some warmth and to provide better viewing.

Matamatas are carnivores and feed almost exclusively on live fish. Offer them a variety of prey such as goldfish, platies, mollies, minnows (shiners), Gambusia, guppies, and even earthworms.

Most problems with captive Matamatas are water quality related. Unclean water or water with high pH are common poor husbandry offerings. Matamatas are often imported with injuries to their feet or skin, especially the delicate flaps that aid in their astonishing camouflage. If kept clean, these areas will not regrow, but will heal quickly.

Matamatas have proven somewhat difficult to deparasitize as they tend to eat only live prey. We have had success with injecting a dose of Panacur® into a dead minnow or goldfish and wiggling the fish in front of the turtle or allowing it to float down in front of a turtle that is eager to feed. Though difficult, it is important that imported specimens are deparasitized and acclimated to be established and bred in captivity.

Note: Hatchling and small Matamatas are sensitive to their captive conditions. Care must be taken that their needs are met almost precisely. They require warm, clean water with a low pH and with plenty of tannins. The addition of live plants to their captive environment seems to be important as well.

It is also apparent that small Matamatas should be set up in their enclosures and not handled very much. Many young turtles will refuse to feed for long periods of time after they are imported, shipped, or disturbed by extensive handling. When established in a secure enclosure with the proper conditions, young Matamatas will begin feeding on a variety of live fish. Offer them guppies, assorted livebearers, goldfish, rosy reds, and others.