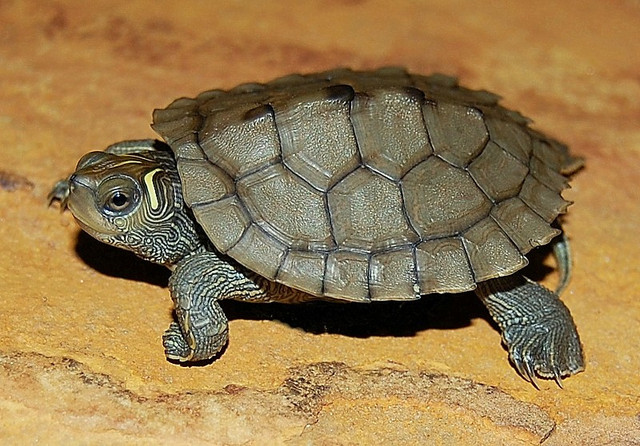 Map turtles have had a devoted following in the turtle hobby for several years. These North American turtles are secretive, and many species are rare in their natural habitats. They are alert baskers and active swimmers. Most species are beautiful with intricate patterns. Sexual dimorphism is extreme in map turtles with females reaching much larger adult sizes than males. Map turtles were recently proposed for CITES protection. This proposal did not proceed, but Map turtles or "Sawbacks" are a good species to consider for a special breeding program.

There are eleven species of Map turtles spread throughout the United States, mostly in the southeastern river systems.

Adult females of most species of Map turtles can reach 7 inches and adult males are considerably smaller, with most only reaching 5 - 6 inches.

Though similar in appearance to Sliders and Painted turtles, Map turtles have some unique and specific needs. Map turtles are generally found in clear, fast-flowing rivers and so require plenty of filtration and oxygenated water in their captive enclosures. A 20-gallon long aquarium will still work well for two or three babies, but a keeper should be sure to keep the water clean. We use an outside filter on the back and we add a small airstone at one end to add some extra oxygen and a bit of turbulence to the water. They seem to love it! These turtles are baskers, so be sure to add some driftwood and other places for them to rest and get some heat and UVB.

As they grow, watch for aggression in Map turtles. Larger specimens, especially females are often aggressive to the subordinate males and to any smaller turtles housed with them. Therefore, it is important to add plenty of decorations and an extra basking spot or two to their environment and to avoid crowding.

Map turtles thrive in outdoor ponds. They are avid baskers so at least one large basking spot should be available. Northern species will hibernate, and care must be taken to formulate a plan for a moderately cool hibernation area. Most southern species will need to be brought inside during the coldest parts of winter (below 45° to 50° F). They should, however, be kept cool during this time in an effort to inspire courtship and breeding behavior once they are returned to a warm outdoor enclosure in the spring.

For outdoor enclosures, we suggest that you do not crowd your map turtles. The addition of lots of aquatic plants, especially floating varieties (water lettuce, water hyacinth, and duckweed) helps keep the outdoor map turtle pond healthy and keeps the oxygen level high.

Map turtles are omnivores. In captivity, the majority of their captive diet consists of floating aquatic turtle food and a variety of aquatic plants. Typically, hatchlings and young map turtles feed on more plant matter than adults. Physically, adults develop large, muscular jaws in response to a natural diet of hard-shelled snails and crayfish. They also eat a wide variety of insects. Freeze-dried shrimp and krill are a great treat for map turtles. These can be bought in most pet stores that offer tropical fish food and supplies.

Map turtles are often afflicted with shell problems in captivity. If not offered natural sunlight and indoor UVB, they will often develop a mild form of fungal infection. It is usually not complicated with ulceration, but appears as white or gray patches that will spread over most of the carapace if left untreated. Acriflavine and drying out in direct sunlight have proven to be effective in preventing the spread of this fungus.

Remember: Try to maintain a high concentration of oxygen in your Map turtle enclosure. You can add lots of extra aquatic plants and use a larger-than-expected filtration unit. By keeping oxygen levels high and pH levels appropriate for the species, you will prevent many of the problems normally encountered by map turtle keepers.

The False Map Turtle (Graptemys pseudogeographica) is found from southern Minnesota, Wisconsin, and southeast to Louisiana and Texas. They do not have the broad, muscular heads seen in many map turtle species due to their diet which consists almost entirely of insects and insect larvae instead of crustaceans and mollusks seen in other map turtles. Female False Map Turtles reach 9 inches and males reach 5 inches.

Cagle's Map Turtle (Graptemys caglei) from the Guadalupe and San Antonio Rivers in South central Texas, is an ornately patterned species that reproduces well in captivity. As with many map turtle species, there is extreme sexual dimorphism in Cagle's Map Turtles. Adult females typically reach 10-12 inches as adults and males mature at 4 inches and rarely reach more than 5 inches.

Black-knobbed Map Turtles (G. nigrinoda) are found in the Tombigbee and Black Warrior River systems in Alabama and Mississippi.

The beautiful and rare Yellow Blotched Map Turtle (G. flavimaculata) is found in the Pascagoula River system in Mississippi. Mature males are considerably smaller (3-4 inches) than mature females (6-7 inches). Also, males have elongated claws which they use in courtship displays. Females typically lay 4 to 6 eggs in a clutch. Hatchlings are small and usually require considerable work and the offering of mosquito larvae or live blackworms to begin feeding. Once started, they thrive in an enclosure with clean, aerated water and plenty of live plants and a secure, warm basking area.

The rare Ringed Map Turtle (G. oculifera) is found in the Pearl River in Mississippi and Louisiana. Adult females reach 8 inches and males become sexually active at 4 inches. They feed on a variety of insects and insect larvae and the shy hatchlings enjoy daily feedings of mosquito larvae and live blackworms. Female Ringed Map Turtles lay only 3-4 eggs per clutch.

Alabama Map Turtles (G. pulchra) are found from the Yellow River in Alabama and Florida to the Pearl River in Mississippi and Louisiana.

Texas Map Turtles (G. texana) from the Colorado River in Central Texas, are beautifully marked with radiating lines. Females grow much larger than males. This species does well in captivity and has proven to be relatively easy to breed.